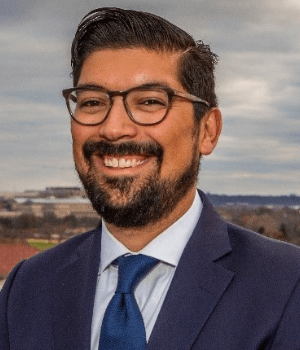 Since 1935, The Wilderness Society has led the effort to permanently protect 109 million acres of wilderness in 44 states. With a mission to unite people to protect America’s wild places, the organization has been at the forefront of nearly every major public lands victory.

Marco De Leon previously served as Regional Chief of Public Affairs for the National Park Service. In this capacity, he led a team supporting 85 parks and numerous regional programs across eight states in developing and delivering strategic communications and engaging elected officials. In this role, he served as a member of the regional executive team, briefing senior regional leadership on internal and external communications, media relations, and legislative affairs. During the recent transition to the Biden Administration, senior leadership selected him for a four-month detail as acting chief of public affairs for the bureau, where he briefed political appointees of the Department of the Interior and led communication efforts across the Service. Additionally, his colleagues selected him for leadership roles in the National Park Service’s Communications Council, Wilderness Executive Committee, and the Hispanic employee resource group. These groups all serve to direct National Park Service policy, inform its work, and support the workforce.

Prior to his experience with the National Park Service, De Leon worked on Capitol Hill where he gained an intimate knowledge of policy, politics, and process. While working for the United States Hispanic Chamber of Commerce, the nation’s largest Hispanic business organization, he managed the organization’s policy portfolio and led its advocacy efforts. This involved serving as the subject matter expert on numerous policy matters, messaging to the public, interfacing with federal, state, and local government officials, as well as cooperating and coordinating with national trade associations, advocacy organizations, and corporate stakeholders. While working for Senator Charles Schumer, he drafted and negotiated legislative language with national, state, and local policy stakeholders and other congressional offices, as well as developed talking points, speeches, press releases, and policy memos. De Leon has also worked on several electoral campaigns. This fast-paced work developed his skill in distilling broad and complex bodies of information into clear and concise communication products.

De Leon holds a Master in Public Affairs from Princeton University and a Bachelor of Arts from Stanford University. In addition to his experience, De Leon is a self-motivated, adaptable, team player with a passion for the outdoors and wild places.