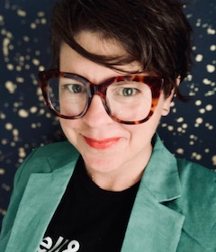 Koya | Diversified Search Group partnered with San Francisco AIDS Foundation on the search for a Senior Director of Development.

Amy S. Williams has been working in the nonprofit sector since her first job at 15 years old as a part time assistant at a local EasterSeal in her hometown of Eugene, OR.

In her 20+ year career, Williams has raised millions of dollars for organizations that are embedded in social justice movements.

Prior to joining San Francisco AIDS Foundation, Williams served as the Director of Development at Planned Parenthood Columbia Willamette, where she led the development team in creating systems to increase philanthropic support from $3.5 million to $6 million annually through the development of a major gifts program, legacy giving and increased support through the agency’s major fundraising event, while also being instrumental in creating the organization’s post-Roe strategy.

Prior to that, Williams was the Director of Development and Communications at Cascade AIDS Project in Portland, OR where she helped to develop Prism Health, the region’s first LGBTQ+ primary care clinic along with leading the team to produce the annual CAP Art Auction, one of the premier fundraising events in the Pacific Northwest.

Williams received her BA in English Literature from the University of Oregon.