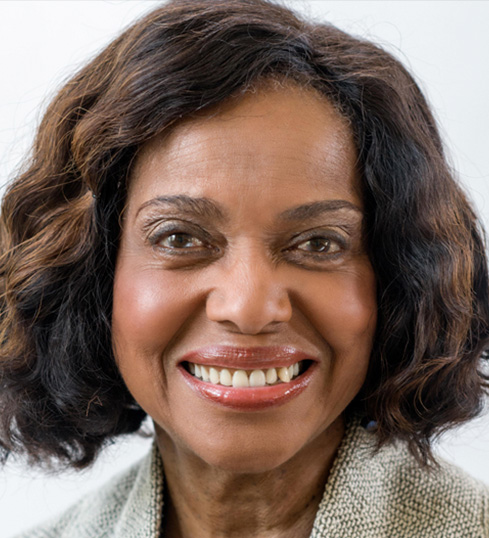 Gwendolyn King is President of Podium Prose, a speakers bureau and speechwriting service, in Washington, D.C. Prior to her launch of the company, King was Senior Vice President of Corporate and Public Affairs for PECO Energy Co. (formerly Philadelphia Electric Co.) from 1992 until her retirement in February 1998. From 1989 to 1992, she served as the 11th Commissioner of the Social Security Administration under President George H. W. Bush.

King was appointed by President Ronald Reagan as Deputy Assistant and Director of Intergovernmental Affairs at the White House from 1986 to 1988. While there, she was appointed to the Advisory Commission on Intergovernmental Relations, the Interagency Committee on Women’s Business Enterprise, and later, the Board for International Food and Agricultural Development. She was appointed by President Bill Clinton to the Commission on the Social Security Notch Issue, and by President George W. Bush to the Presidential Commission to Strengthen Social Security. Prior to her Presidential appointments, King directed the Pennsylvania Governor’s Washington, D.C., office for six years, following her service as Senior Legislative Assistant to U.S. Senator John Heinz (R-PA).

King was a Founding Partner of The Directors’ Council. She is a Director of Lockheed Martin Corp. and Monsanto Co., and ended 12 years of service on the board of Marsh and McLennan Cos. in May 2011. She served for six years as director of the National Association of Corporate Directors from 2004-2010. She is a trustee of the Barnes Foundation in Philadelphia.

King graduated from Howard University and did graduate work at George Washington University. She received honorary doctorates from the University of New Haven and the University of Maryland, Baltimore County; the American Black Achievement Award from Johnson Publishing Company; and the Drum Major for Justice Award from the Southern Christian Leadership Conference. The Washington Business Journal selected her as an Outstanding Director in 2012.

She is married to Pulitzer Prize-winning Washington Post columnist Colbert I. King. The couple has endowed a Chair in Public Policy at Howard University.